Sign up to receive advance notice of future custom bound books and other news.

The Story Behind the Rebinding Project

I really admire and respect the work of hand bookbinders. When it comes to rebinding books, you are limited only by what you can imagine, and how much money you have to invest. Rebound books can range in cost from a few hundred to several thousand dollars for high-end designer bindings. For some time I have wanted to do something with The Eyes of the Dragon by Stephen King because the book has special meaning to me.

I procrastinated for months, then early in 2016 I got things started by contacting a few bookbinders with my ideas. I thought it would be fun to buy some copies of the 1st edition published by Viking in 1987 and rebind it. The obvious choice was to go with a leather that is engraved with a reptilian pattern. Basically something that might resemble dragon skin.

I also had to come up with a way to do it that wouldn’t cost thousands, but was still unique and desirable. After some time, I settled on a bookbinder who was enthusiastic about the project. Before I got too far into it, I had some prototypes made and decided to put the idea out to some Stephen King fans via the TheDarkTower.org forum and see if anyone else was interested in getting a copy. As it turned out, I received an enthusiastic response. So I had my work cut out for me.

Back in 1987 when I was nineteen, I walked into a bookstore and one of the books on the shelf caught my attention. It was The Eyes of the Dragon and that is how I discovered Stephen King. It was this book that turned me into a fan and a collector. It also inspired me to start a small mail order business specializing in science fiction, fantasy and horror, and this evolved into a retail bookstore.

Those years were some of the best years of my life, and I feel that if I had not discovered this book, that whole chapter may never have happened. There is so much more to share about this experience, but to stay on the topic of this project, I’ll save that for another time.

I remember back then while reading the book, how much I liked the artwork. I never would have thought that almost 30 years later I’d become friends with the artist, David Palladini.

Around the time I had the idea to rebind this book, I thought it would be great to see if David was still around and if he would be willing to do a drawing in the book. I tracked him down, and was amazed to discover that he lived about 15 minutes from me! To cut a long story short, I made contact and we ended up becoming friends.

I told David about my plans and he loved the idea, but due to advancing age, his right hand had developed a tremor and he can no longer draw.

As far as I could tell, the collecting community had not seen or heard from David in the context of the book for a very long time. I figured the next best thing to getting a drawing, was to see if David would sign the copies that I planned to rebind, and he agreed. David’s signature in this book is rare because he only signed a few for friends and family over the years. This was also a way of sharing my good fortune at having met David with other collectors who may not be able to obtain his signature otherwise.

The first image is one of my favorite photos of David, taken when I showed him the book. He started paging through it, looking at the artwork he’d created all those years ago. I could tell he had not looked at these drawings in a long time. You can see the delight in his expression. I suspect for him, it was like seeing an old friend again after many years.

When I finally got the project started, I sent an email out to at least 10 bookbinders and eventually settled on Tim from Bohemio Bookbindery in Ann Arbor, Michigan. He was the most responsive and certainly the most excited about the project. I had no idea how many decisions would have to be made and how long it would all take. We spent a good deal of time coming up with ideas for how we could rebind the books and also keep the costs palatable. Eventually we settled on three options, one of which I scrapped.

Three prototypes were made so I could get a sense for what the finished binding would look like. The prototypes are much smaller than a standard hardcover book and have blank pages. Below are the three options we came up with. The last one didn’t make the cut.

Once the two binding styles were decided on, I had to find copies of the book and buy them. This was more involved that I thought it would be. Finding copies that weren’t in the best shape was the easy part, given the age of the book. Since this was a rebinding project, the condition of the dust jackets and the boards were not important.

What did matter was the page block, which had to be as clean as possible. That wasn’t easy and I ended up having to purchase quite a few more copies than was needed because as the books started to show up, not only were some of the page blocks in bad shape, but a good number of the books ended up being book club editions. It was important that the copies I sourced were true first editions.

Here are some pictures of most of the books before I sent them off to the binder.

Even though we’d created some prototypes, I felt that it was necessary to make a complete rebound book before starting on the rest. The prototype was created to provide a general idea about the look and feel of the different binding styles, but many of the details aren’t included in the prototype. So we created the first sample which helped me in making some tweaks to the binding.

It was clear that the stamping on the spine didn’t work when stamped directly onto the engraved leather. Because of the reptilian pattern, it is a rough surface to stamp letters on, so we decided to go with ‘spine labels’ and stamp on that. Basically a patch of smoother leather that is affixed to the spine.

There were other decisions that had to be made during this phase. For example, we decided to trim the page edges very slightly which would remove any dirt or stains to the page block and you end up with a nice clean white edge.

Another tweak we made had to do with the headcap. The cowhide leather that is dyed and engraved with a reptilian pattern is quite thick and when bound on the boards, it doesn’t give that “sculpted” look at the headcap. So the binder pared the edges of the leather and got really good results, which you can see in the photos.

The first photo shows the thicker leather at the edges around the headcap. The second photo is the result of the paring and demonstrates how a headcap ought to look. The back cuts in the board are clearly visible and the headcap has a sculpted, much more refined look.

If you read the full descriptions in the sidebar, you can learn about the different elements that went into rebinding this book. Below are some pictures of the different stages throughout the hand binding process.

I had fun working on this project. All told, it took about 9 months of work on and off. I feel it is a nice homage to the book that has so much meaning to me. I hope those of you who were able to acquire a copy, enjoy it and find much pleasure in adding it to your collections. 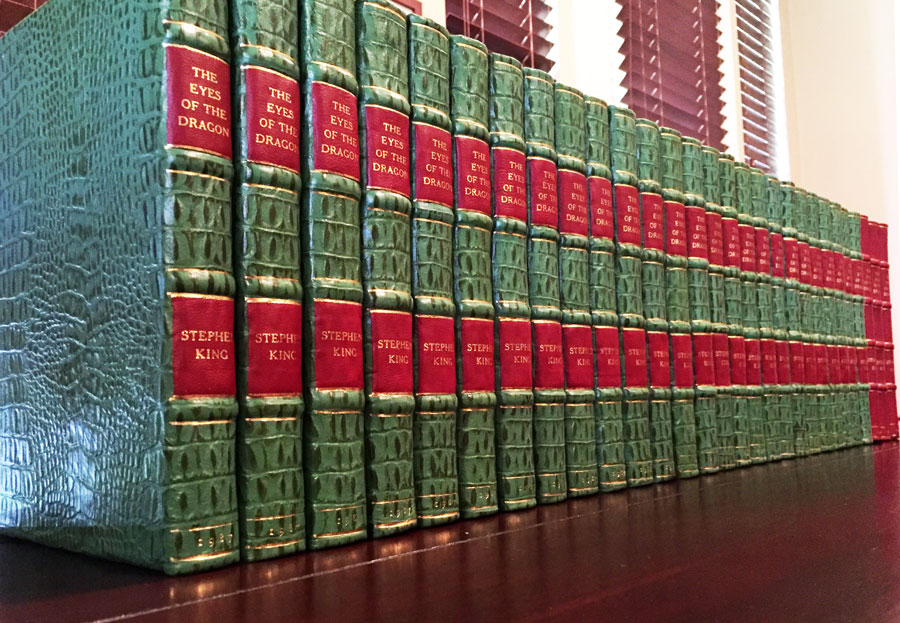 This custom rebound edition of The Eyes of the Dragon uses the page block from an original Viking Trade First Edition Hardback.

Two binding styles were made and all are signed on the title page by artist David Palladini.

Style 1:
This book is a full leather binding. The leather is a cowhide that is dyed and engraved with a reptilian pattern.

The page edges have been cleaned and the book boards are sanded at the edges to create an elegant bevel. The endsheets are hand marbled by the bookbinder into a flame pattern. The spine is rounded and with the addition of a hollow back and shoulders fitting behind the book boards, shelf wear and the sagging of the text block over time will be prevented. The spine is tooled in gold with raised bands and a sculpted headcap that crowns the woven silk headbands. The book is housed in a custom linen cloth slipcase.

7 thoughts on “The Eyes of the Dragon”

This site uses Akismet to reduce spam. Learn how your comment data is processed.